Planning, design, construction and maintenance must treat bicyclists as equal and intended design users in all transportation projects and end-of-trip facilities, including connections to bus and rail transit. Let’s examine these, as well as relevant federal policies, in more details.

1)  Planning – Includes bicycling in system plans, as well as project plans and project initiation documents. Includes oft forgotten amenities, such as way-finding signage. Every non-freeway street/highway MUST be treated as a facility that bicyclists will use, and their needs must be considered. Connecting routes favored by bicyclists is also important, as well as serving the full spectrum of bicyclists. These ideas — particularly that bicycling is anticipated on all city streets — must be the top level policies in sound bicycle master plan (BMP) documents.

City of Long Beach has the following top level policies 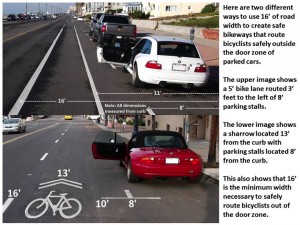 2)  Design – Ensuring that both the geometric layout and traffic controls used on conventional highways (non-freeway roads) conform to best practices, such as treating cyclists as drivers and not manufacturing conflicts. Such conflicts often result from placing bicyclists to the right of right turning traffic, with either freeway-like features or with bikeways at the road edge. Conflicts can also arise from bikeways that route cyclists into the door zone of parked cars, or otherwise route them into roadside hazards. Features like dual free right turn lanes, shallow angle entry/exit ramps (typical for uninterrupted flow facilities like freeways) should not be used on interrupted flow, conventional highways because they place bicyclists at a speed/movement disadvantage and decrease the safety of bicycle traffic for the convenience of turning/entering/exiting motorized traffic. Traffic signal must reliably detect bicyclists and provide the same level of service as is provided to motorists. Surface standards must ensure that highway surfaces are bicycle tire/wheel compatible. See the I Am Traffic Best Practices Guide for more on this subject.

An evolving practice of note is how California specifies such zones in the California supplement to the MUTCD (CAMUTCD Section 6D.101, Page 1044).

There are several considerations in planning for bicyclists in TTC [Temporary Traffic Control] zones on highways and streets:

A. A travel route that replicates the most desirable characteristics of a wide paved shoulder or bikeway through or around the TTC zone is desirable for bicyclists.

B. If the TTC zone interrupts the continuity of an existing bikeway system, signs directing bicyclists through or around the zone and back to the bikeway is desirable.

D. When the roadway width is inadequate for allowing bicyclists and motor vehicles to travel side by side, warning signs should be used to advise motorists of the presence of bicyclists in the travel way lanes. See Section 6G.05 for more details.

E. Bicyclists shall not be led into direct conflicts with mainline traffic, work site vehicles, or equipment moving through or around the TTC zone.

5)  End-of-Trip Facilities – Fixed bicycle parking (racks and lockers) at public and private facilities, as well as the inclusion of fixed bike racks/lockers, clothes lockers and showers at public and private employment buildings for commuters.  These can be accomplished either by encouragement or in policies or ordinances (see Equality).

6)  Inter-modal connections – Bus and rail racks as well as bicycle accessibility and or access to bus and rail transit stations/connections.

Per federal guidance, bicyclists are expected to be given safe and convenient facilities, to be integrated into the decision-making process, and to have state and local agencies go beyond minimum standards.

Furthermore, federal policy calls for considering bicycling as equal to other modes, ensuring choices for travelers of all ages and abilities, including bicycle access on limited access bridges, as well as going beyond minimum design standards.