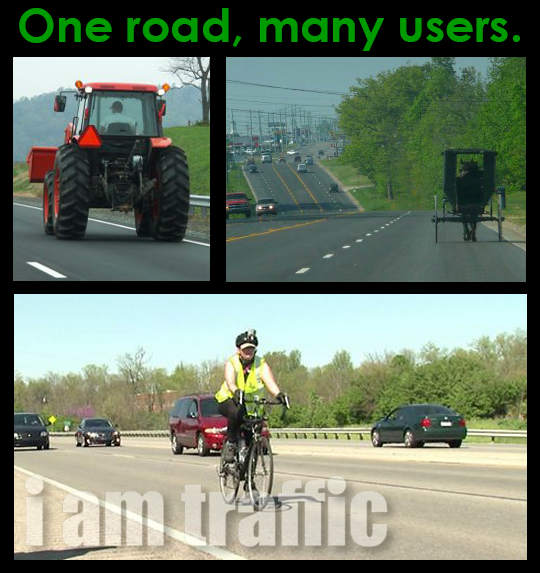 Recently, the bicycling world has been aghast to learn that a law-abiding citizen is being charged with “reckless driving” in Kentucky…despite all facts to the contrary. Cherokee Schill, a single mother, cut expenses by using her bicycle as transportation to work. Her route to work includes a section of U.S. 27, a high speed limit, multi-lane road.

Schill, 41, said if there were an easier way to get to work, she would take it. Her 1992 Toyota Camry with 360,000 miles is not dependable. To be able to afford housing and food for herself and two teenagers, the divorced mother said commuting by bike keeps her household afloat.

“I’m not putting myself here because I think it’s fun or exciting,” Schill said of the commute. “I’m here because I’ve got two kids to feed and a roof to put over their head. … I’ve got to pay rent, pay bills and buy groceries.”

The Lexington Herald-Leader also notes that she has not been involved in any crash since she started commuting by bike last June. Despite the fact that Cherokee is operating completely within the local and state laws, the Nicholasville police officers and Jessamine County deputy sheriffs have cited her three times, twice for “careless driving” and once for “reckless driving”, and the Jessamine County Attorney’s office has asked the county judge to prohibit her from riding on U.S. 27.

Reading the news reports, it’s clear that a reverse logic is working here. Instead of holding motorists responsible for inattentive driving, the police and county attorney are persecuting a law-abiding bicyclist.

“It just creates a very dangerous situation when you’ve got somebody on a bike that’s difficult to see to begin with, on a very highly travelled [sic] road, with signifigant [sic] speeds and a lot of people don’t pay attention to what they should be while driving, so it all compounds itself,” said Jessamine County Attorney Brian Goettl.

Goettl says a deputy sheriff responding to a robbery almost wrecked because Schill backed up traffic.

“He was almost in a wreck because of Miss Schill, and so it added to me another element of danger that I hadn’t even thought of before,” Goettl said.

Instead of persecuting Cherokee, why are the inattentive motorists not being ticketed and targeted for prosecution? Why was the deputy sheriff not paying attention to his own driving? Is the deputy sheriff’s story about almost wrecking even true? Or is it merely a rationalization of his feelings that cycling has no place on that road? Why is the convenience of other road users a higher priority than Cherokee’s right to the road? If a slow-moving tractor were on U.S. 27, would motorists be calling 911 for help? Would the 911 operators and police even give a moment of attention if someone was commuting via horse-drawn carriage (such as many do in Amish and Mennonite communities)?

Randy Thomas, president of the Bluegrass Cycling Club, said Schill is operating within her legal rights and in accordance with safety requirements. Asked if he would ride U.S. 27, Thomas said, “I personally am not going to comment. I ride all over the area, and I’m sure I ride roads that cyclists wouldn’t feel comfortable on. It’s irrelevant what I would do or what anyone else would do, if she’s riding within her rights and what she’s comfortable in doing.”

While she awaits a trial in August, the county attorney asked a judge to stop her from riding on U.S. 27. Fortunately, the county judge ruled in favor of Cherokee Schill and allowed her to continue to commute to work. The full trial will begin in August.

To hear first hand from Cherokee, take a listen to this week’s podcast from The Outspoken Cyclist.

i am traffic applauds Cherokee Schill, Judge Booth, and local advocates like Randy Thomas who are affirming all bicyclists’ right to the road. Steve Magas, a contributor and friend of i am traffic, will be helping to defend Cherokee pro bono, but there will still be legal fees that Cherokee must cover. We encourage you to donate to Cherokee’s legal defense fund and continue sharing this story. Stay tuned to our Facebook and Twitter accounts for updates.