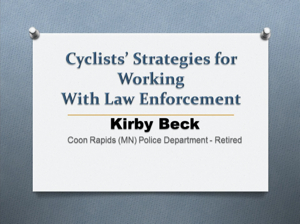 In this series of videos, Kirby Beck – retired police officer, instructor and trainer with the International Police Mountain Bike Association – gives a comprehensive overview of cycling law enforcement. In part 1, Beck takes us through the fascinating history of cops on bikes, from the early police officers who stopped speeding horses, to the bike-based rapid response team that kept anarchists from burning St. Paul during the 2008 Republican National Convention. Plus, we get an amusing look back at 1970s TV cop show Adam 12, in which the protagonists clock a neighborhood cyclist at 45 mph.

Beck also gives an overview of the current state of enforcement of bicycle law – or lack thereof. Frustratingly for bike advocates, Beck says,

“Virtually no officers I have ever spoken with have had any kind of specialized training in bicycle laws or bicycle enforcement, anywhere in this country. The most they get is at rookie school where they are given the traffic code and [are told to] read it and memorize it….

“There is nothing in their background, except for the same biases that every other motorist on the road has. So that’s what you’re dealing with and it’s not intentional. It’s just they don’t know any better.”

In Part 2, Beck describes what police mean when they describe something as a “problem” (hint: it’s different from how you or I might use the word), how to effectively report incidents to 911, and how to deal with police who cite you with cycling violations. In Part 3, he explains what police need to learn and how to get heard by your local police department.