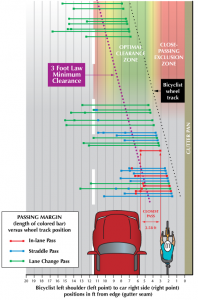 A novel data collection method using bicycle helmet mounted video cameras has been applied to a case study of bicyclist lateral roadway position versus motorist overtaking distance. A 0.3 mile stretch of a multilane roadway in suburban Los Angeles with narrow outside lanes and no driveways or intersections was selected for the study. The bicyclists made multiple runs along this stretch of roadway, varying their lateral roadway position each time. The bicyclist lateral position in the outside travel lane and the overtaking clearance provided by the motorist were measured using still images extracted from the video clips.

When the bicyclists rode near the gutter, the motorists exhibited the full distribution of overtaking behaviors ranging from in-lane passes, to a number of straddle passes, and a group of lane change passes. However, when the bicyclists were left of the center of the lane, the closer motorist passes (the in-lane and straddle passes) were consistently replaced by full lane change passes. While the number of data points was insufficient to establish a quantitative relationship, the data seem to indicate that bicyclist lateral position has a significant influence on motorist overtaking distance.

Below is a gallery of video screen shots of each pass with measurements.