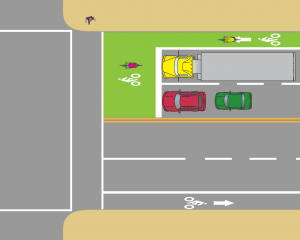 A traffic control device which places an advanced stop line for bicyclists ahead of the regular stop line for motorists. There are two types of bike boxes: one that facilitates a 2-point box turn; and one that allows bicyclists in a bike lane to pass a queue of stopped traffic and move to the front of the line.