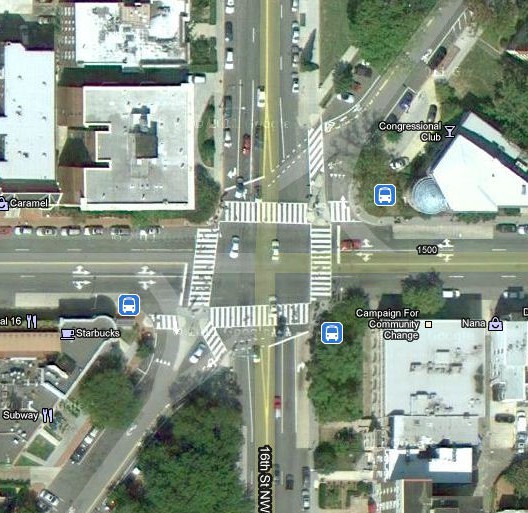 Washington, DC, USA is a planned city, with a north-south and east-west street grid, overlaid with a number of diagonal avenues. These add to connectivity and offer vistas of important landmarks. In the horse-and-buggy era, when the street plan was laid out, there was little concern for any resulting complication in traffic movements.

New Hampshire Avenue is one of the diagonal avenues, and its intersection with 16th Street and U Street is, as you might surmise, a 6-way intersection.

The image below, from Google Maps, gives an overhead view of the intersection.

The intersection was reconfigured in 2010 with “bike boxes”—bicycle waiting areas, ahead of where motorists wait. In other writings, I’ve given details about “bike boxes”.

Special traffic signals and contraflow bike lanes also were installed, in an attempt to regularize and legalize bicycle travel through the intersection. The illustration below is from a sign which the Washington, DC Department of Transportation posted at the intersection. The sign describes how the intersection is intended to work. You may click on the image to enlarge it so you can read the instructions.

The bike boxes at this intersection are a variation on the “cross-street bike box” — as I have called it, or the “two-stage turn waiting area” as it is sometimes called. It facilitates a “box turn” — a left turn in two steps: going straight ahead, stopping a the far right corner — then turning the bicycle to the left and proceeding when the traffic signal changes. The two-step left-turn usually involves more delay than a left turn from the normal roadway position, but it doesn’t inherently violate any of the principles of traffic movement. Timid or inexperienced cyclists may prefer a two-step left turn. It can work for any cyclist at an intersection where normal left-turn movements are prohibited, or if an opportunity to merge does not arise.

When I first saw the plans for this intersection, I regarded them positively. I even wrote about this and published my comments. As I already said, a cross-street bike box violates none of the fundamental rules of traffic flow.

But , there is a saying:

“In theory, there is no difference between theory and practice. But, in practice, there is.”

If I couldn’t laugh, I think I’d weep.

So, what’s the problem here?

In an ordinary four-way intersection, a cyclist can execute a two-step left turn using the same traffic-signal phases as other traffic. The cyclist will get a green light for the first step, wait on the far right corner and then get the green for the second step along with other traffic.

By introducing traffic — bicycle traffic — entering from New Hampshire Avenue, the DC Department of Transportation introduced the need for traffic signal phases which it had been avoiding. For this reason, the bike boxes here are not quite the usual cross-street bike boxes.

In May, 2011, I was one of several cycling advocates who converged on Washington, DC to examine cycling conditions. We discovered that theory and practice diverged widely at this intersection. Cyclists were not using it according to plan. Instead, they were using it as shown in the video here. This is an HD video and is best viewed full-screen, by clicking on the “vimeo” link.

When U street (right to left in the illustration) has the green light, cyclists cross 16th street on the concurrent pedestrian signal phase, as shown by the solid green lines. Note that this does not mean that the cyclists have the green light with the special bicycle signal. The cyclists are in conflict with right-turning traffic from U Street. As the cyclists are not stepping directly off the corner like the pedestrians, and travel faster, motorists have a harder time seeing and yielding to the cyclists.

On reaching the far corner, the cyclists turn their bicycles left. As shown in the video, most wait in the crosswalk rather than in the designated bicycle waiting area. When the light changes, the cyclists proceed across U Street and bear right onto New Hampshire Avenue, as shown by the dotted green lines. 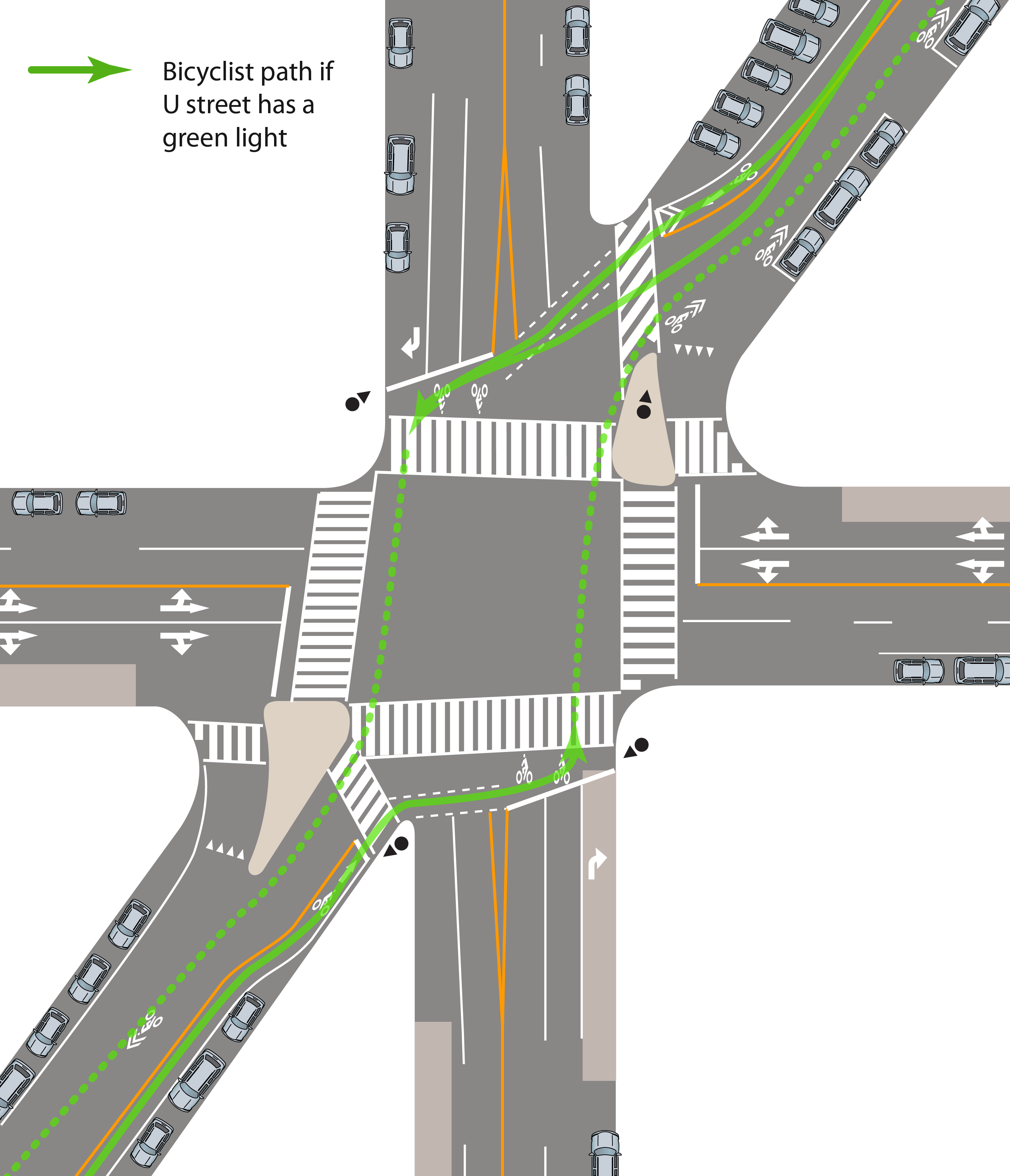 When U Street has the red light, cyclists travel around the intersection clockwise. They start by riding opposite traffic, then cross U street from right to left in the near-side crosswalk as shown by the orange arrows in the illustration below. The cyclists wait on the far left corner, then cross 16th street and continue on New Hampshire Avenue as shown by the dotted orange lines. 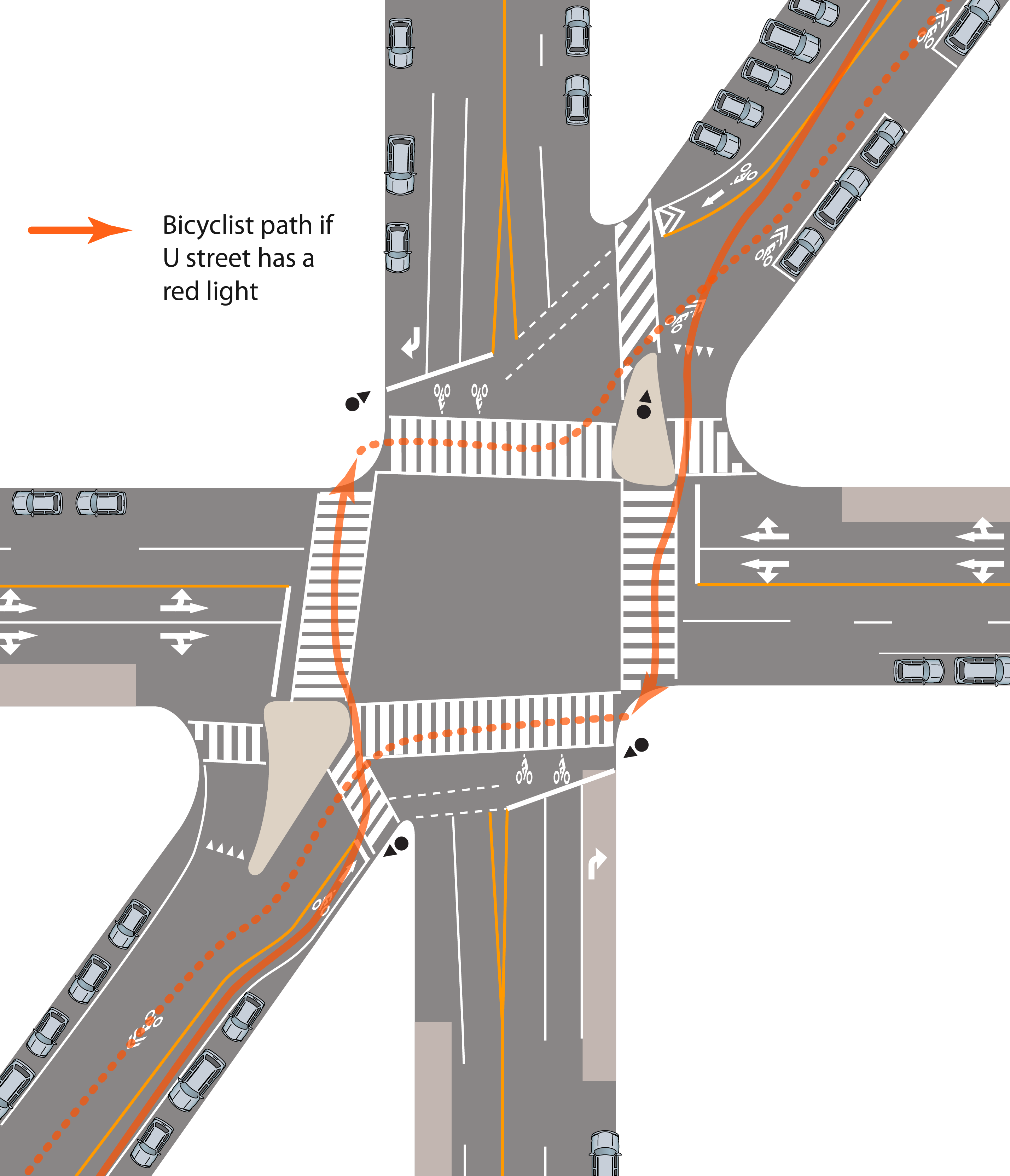 The video below shows three expedition participants riding through the intersection on the designated route, and obeying all the signs, signals and markings the best we could. Bear in mind that I have edited out most waiting for the special bicycle signal. Like the other video, this is an HD video and is best viewed full-screen, by clicking on the “vimeo” link.

Why do few cyclists, other than our expedition participants,  obey the special traffic signals and follow the designated route? There are several reasons:

What lessons does this hold?

There are some design issues:

There are also behavioral issues:

There are larger political and planning issues:

There are peripheral issues:

A collection of all the videos of this intersection from the May, 2011 expedition

DC DOT photostream of the installation (first of several photos. Click on “newer” to see the others.)

GreaterGreaterWashington blog post about the intersection, with extensive comments.

Consultant’s blurb about the project

John S. Allen cycles for transportation and recreation, averaging 2000 to 3000 miles per year. He has made a career as a writer about bicycling; he is author or co-author of several bicycling books and has contributed to several magazines; his work may be found on the Internet at john-s-allen.com, bikexprt.com and sheldonbrown.com. He is a former president of the Boston Area Bicycle Coalition and member of the Board of Directors of the League of American Bicyclists. He is a certified League Cycling Instructor. View all posts by John S. Allen