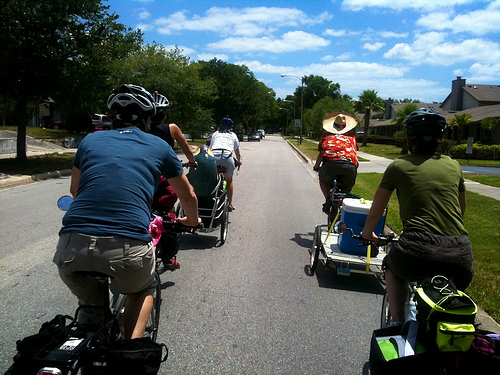 Twice a month since 2006 I’ve taught a course for the local safety council on “alternative” transportation to adults with suspended driver’s licenses.  The students routinely recognize the benefits of bicycling when prompted: improved health, reduced environmental impact, reduced transportation costs, increased sociability, and of course, simple fun.  To varying degrees they also believe cycling to be slow, dangerous, uncomfortable, physically demanding, and impractical if one needs to carry things.  So encouraging people to bicycle is more a matter of removing barriers (practical or psychological) than convincing them of the benefits.

The psychological barriers to bicycling are often more common than the practical ones, so helping people to see the possibilities is a key strategy.  People are influenced and encouraged in different ways and through different channels, including the social realm, finances, urban planning and engineering, and the practical aspects of the bicycle and its accessories.

In November of 2012 BicycleRetailer.com writer Ray Keener dug up some data from a 1990 Bicycling Magazine survey.   While shops and manufacturers might have wondered at the time if an easier-to-use shifter system might have been the answer to getting more people on bikes, only 12% of “infrequent” cyclists said so.  The top motivator the “infrequents” reported was “If I had someone to ride with (46%).”  That was followed by:

A good riding partner, or better yet, an entire group of friendly, supportive riding partners can do more to show a new cyclist the possibilities and joys of cycling than anything else.  Too often cycling groups have themselves placed limitations on cycling.  “We go fast.” “You need a road bike.”  “We only ride trails.”  “Helmets required.”  “Our rides are 30 to 60 miles long.”

I believe the most effective thing experienced cyclists could do to encourage others to ride is simply to ride with them in a place and manner that the newcomer would find comfortable.  That may initially mean on a trail or quiet local streets.  Don’t set any preconditions.  Each ride is an opportunity to share your knowledge and expertise.  But take care to open up the floodgates of information.  Find just a few things to make improvements on each time — get that saddle at the right height; teach proper mounting, starting, stopping and dismounting; get her generally in the right cadence range but don’t fuss about it; etc. —  and spend the rest of your ride simply enjoying the trip.  Your task is not to make your friend into an expert rider in a day.  It’s to show him that cycling can be enjoyable and that there are lots of things he still needs to learn to make it better.  If you agree to give the ride a purpose — to go to a restaurant, a park, another friends place — anyplace they’d routinely go by car — that’s even better.

I’d really like to see each cycling club start a serious new-rider program.  Each weekend there should be rides designed for absolute beginners.  This doesn’t mean going 15 mph instead of 20.  It means taking the one-on-one approach I outlined above and adapting it to a group.

In Orlando we’ve been running rides through CommuteOrlando.com and Bike-Walk Central Florida that appeal to those riders.  These rides are set up to show new riders the possibilities.  Our First Friday rides are social rides of about 10 miles in length that are run all on multi-lane roads.  We maintain a well-controlled double pace line at about 10 to 12 mph and controlling the right lane.  Ride leaders manage it in such a way that everyone is comfortable and knows exactly what to do.  Ice cream rides are held on summer evenings.  New riders get to see that there’s no need for exceptional speed or extreme skills to use a bicycle around town.  Eliot Landrum in Dallas, Texas has some good ideas on this as well. [link to come]

In my 2009 essay Which Cycling Politics: Doom or Possibility? I began with a story.

A woman walks into a marketing and public relations firm and sits down to talk with their lead strategist.

“Our organization has a fun, safe and healthy activity we wish to promote, but we’re struggling to figure out the right approach,” she says.

The strategist thinks for a moment, then responds, “I recommend the approach bicycle advocates have been using for the past 20 years:  reinforce the public’s fears about your activity.”

The woman is taken aback, pauses for a moment, then says, “Oh!  You had me going there for a moment!”

“What do you mean?” asks the strategist.

We must stop being our own worst enemy.  While on the one hand we tout the benefits of cycling, too many “advocates” feed the belief that cycling is dangerous.

Money can be either a motivator or a hindrance in convincing people to bike, or to bike more.  For the person of average means, a bicycle can save money, particularly when replacing auto trips.  Illustrating the full costs of auto use can be effective with them.

For some lower income persons an auto is essential, and the extra expense of a good quality bike is beyond their means.  Further down the economic ladder, many very low income workers use bicycles, but are limited to poor-quality “big box” bikes.  Helping lower income people gain access to good quality bicycles while also providing good cycling education could cast “bicycle advocacy” in a much more positive light.

At the community level, a bicyclist-friendly business program can help in many ways.  Businesses that provide discounts or other bonuses to cyclists make people feel good about the businesses and themselves, and such programs tend to interest local businesses rather than chains.  Business owners also come to recognize cyclists as customers, rather than just strangers out on the road.  Employers and cyclists can also take advantage of federal tax incentives that that allows bicycle commuting costs to be paid for with pre-tax earnings.

A more challenging strategy is removing some of the hidden subsidies for auto use.  Parking, for example, is a valuable service that motorists don’t pay for directly in suburban areas (for retail parking all customers pay for parking as the overhead portion of goods and services), and often pay a subsidized less-than-market rate in city centers.  Reducing the supply of parking where feasible and getting motorists to pay for parking both out-of-pocket and at its true cost will get people to consider cycling for shorter urban trips (though it really must be done in conjunction with significant improvements to the public transit system).

Planning and Engineering as Encouragement

Of course, along with reducing subsidies for and dominance of auto parking, communities also need to improve the availability and quality of bicycle parking.  In a 1995 survey of Orlando area residents, respondents identified good bicycle parking as a more important incentive than trails or bike lanes.  Forgotten in the discussion of bikeways and increased bicycle use in New York City is the fact that the City also changed its codes in 2009 to require commercial buildings to accommodate bicycle driving employees.   Bicycle theft has long been a serious deterrent to cycling in New York.  Leaving a bike locked along the street – even with the best of locks – has always been a risky proposition for cyclists there.  It’s quite possible the bike parking code did more to encourage cycling than the bikeways did.  Local governments should require quality short-term parking for customers and more secure long-term parking for employees.

It’s also imperative that permit review staff understand the particular needs and criteria for quality bicycle parking.  There are myriad ways to do it wrong, and relatively few ways to do it right.

Many Americans live in far-flung suburbs, in which important destinations are beyond comfortable cycling distance.  Combining bicycling with transit can overcome this challenge.  To do so, planners need to provide good connections to and good bicycle parking at transit stops, bicycle accommodations on buses and trains, and other useful amenities, such as bike-sharing systems and shower and locker facilities.

Trails, bike lanes and other types of separated facilities are often pitched as encouragement as much as they are for safety or mobility.  I will leave discussion of the validity of such claims for the Engineering section of this site, but there are engineering treatments that can serve as productive encouragement without compromising the principles of integrated bicycle driving.

Trails in their own rights-of-way and short connector paths can help cyclists stay on neighborhood street networks and avoid busier arterial and collector roads.

Shared lane markings (“sharrows”) and “Bicyclists May Use Full Lane” signs can make it clear to cyclists and motorists alike that bicyclists are normal and expected users of the roadway, and that a centered lane position is usually the preferred position.

Ensuring traffic signal detection systems detect bicycles not only improves safety, but demonstrates that a community cares about the details.

Many non-cyclists and inexperienced ones make assumptions about the practical aspects of cycling: that bicycles are inherently uncomfortable; that one can’t carry very much; that bike thieves can’t be foiled; that bicycling requires a high level of athleticism.  No doubt many who hold such opinions are simply expressing rationalizations to excuse themselves from having to consider cycling at all. Those people are probably not the “low-hanging fruit” of potential new cyclists.

But others simply haven’t been exposed to the practical solutions to those challenges.  On the personal level, we can offer to check that our friends’ bikes fit well and have appropriate saddles.  Advocates for cycling can work with their local shops to encourage them to carry accessories like panniers and trailers if they don’t already.  Cargo bikes could be an element of a bike-sharing system.  CommuteOrlando and Bike-Walk Central Florida lead “S-Cargo” rides, in which the group rides to a local farmers’ market with cargo bikes, trailers and panniers.  Those without such accessories also ride along and get to see the practicality of these tools first hand, as do many of the market or store customers and employees.

All of the Above

It should be clear that there is no single silver bullet for encouraging people to bike.  Some of these strategies can be advanced by us as individuals; others require organization and sustained effort.  Communities that take such an all-of-the-above approach are likely to see real progress.