Visual comparisons of laws affecting bicyclists in the United States

We have a long way to go before bicyclists across the entire country restore the same movement rights as other drivers; rights that we once had but were mostly taken away from us from the 1940s through 1960s.  The maps listed below show the the various inequitable bicycle laws by state.

Feel free to download these maps to use in your advocacy work. Please let us know if any of the laws are incorrect, preferably with legal citations. 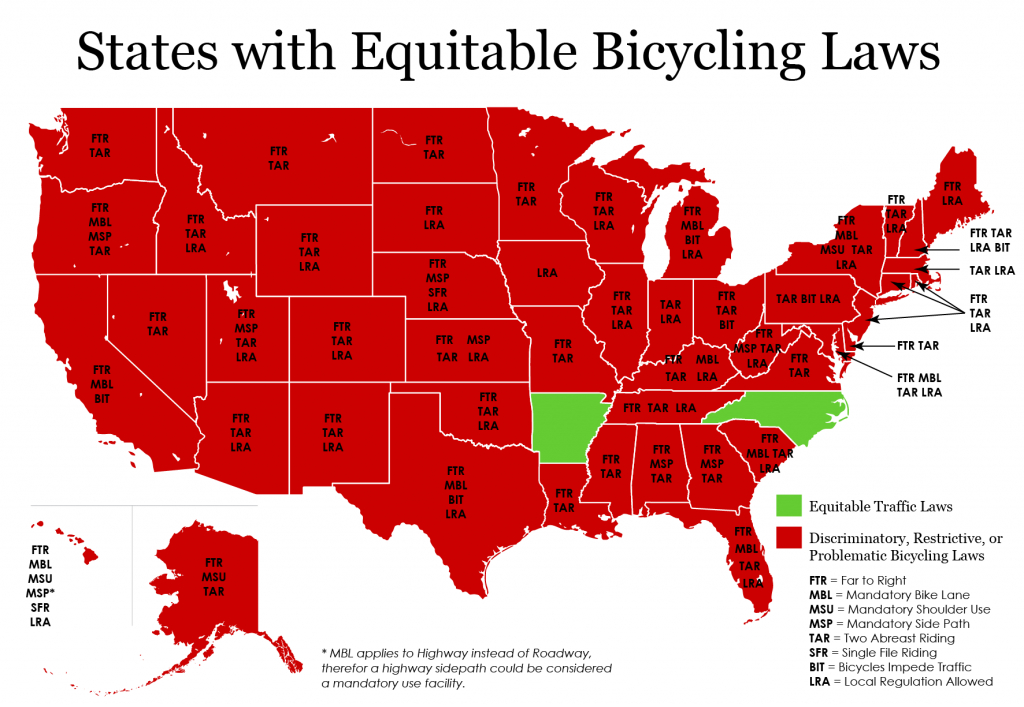 Only two US states, Arkansas and North Carolina have equitable bicycling movement laws. All the rest either allow local regulation, or have FTR and other bicyclist specific restrictive/discriminatory movement laws. 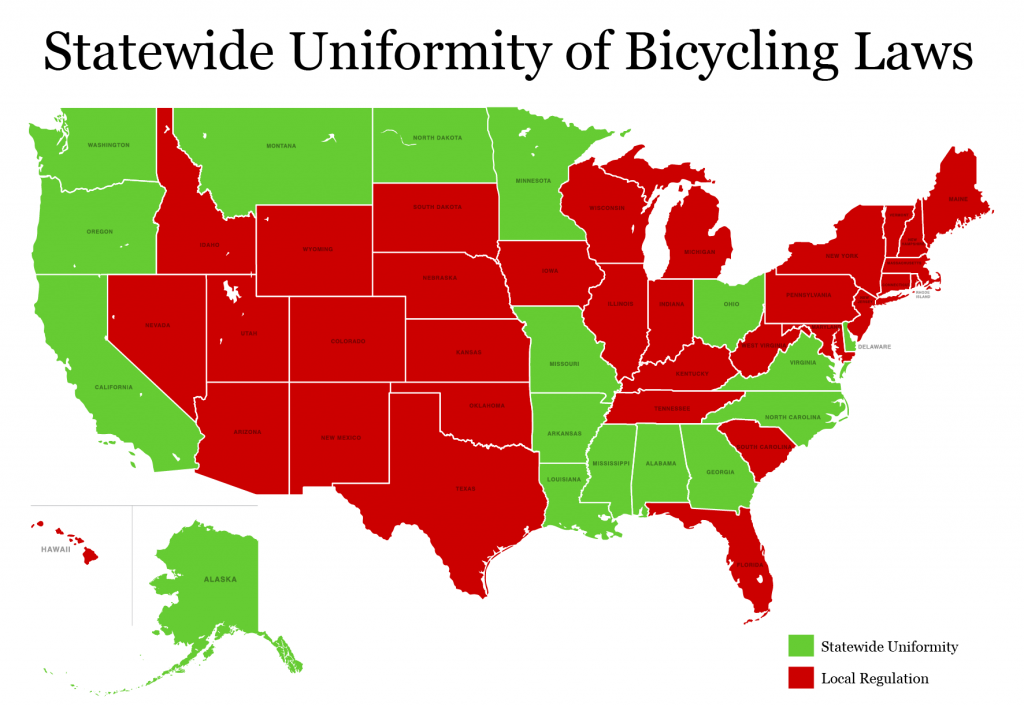 States with uniform bicycling traffic laws means that only the state can regulate bicycling, so laws are uniform throughout the state. However, if the state laws are bad, they are uniformly bad throughout the state! Conversely, states that allow local regulation means that each city and county can write their own custom bicycling laws and any strange restrictions they decide to enact. In these red states, bicyclists are just one city council election away from what happened in Blackhawk, Colorado, where bicycling was banned on the main road through town. And let’s not forget the infamous Chicago right-of-way law that requires bicyclists to ride at the road edge and yield to ALL moving vehicles. Local regulation is very bad, and renders any benefits the state laws may confer to cyclists as transient and fragile. 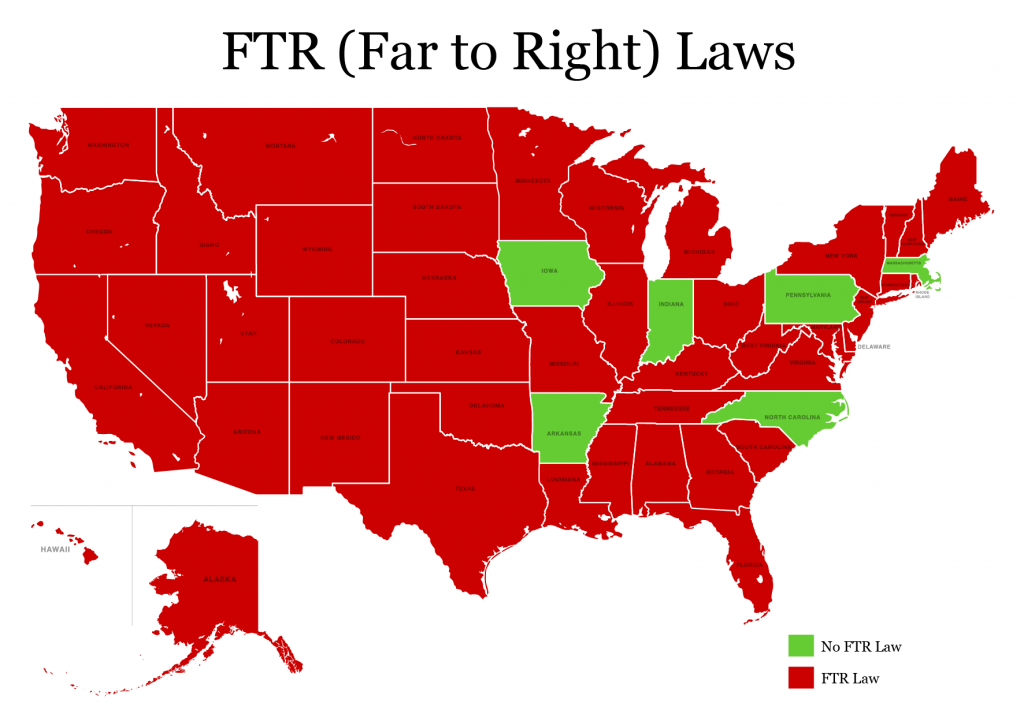 States with discriminatory Far To Right (FTR) laws are colored red. Only six US states don’t force bicyclists to abandon their lane use rights, though of those six, only North Carolina and Arkansas also have uniform statewide laws, so in the other 4 states, local cities can impose FTR laws, and many do. For example, Philadelphia imposes a FTR law upon its bicyclists even though PA does not have a state FTR law! 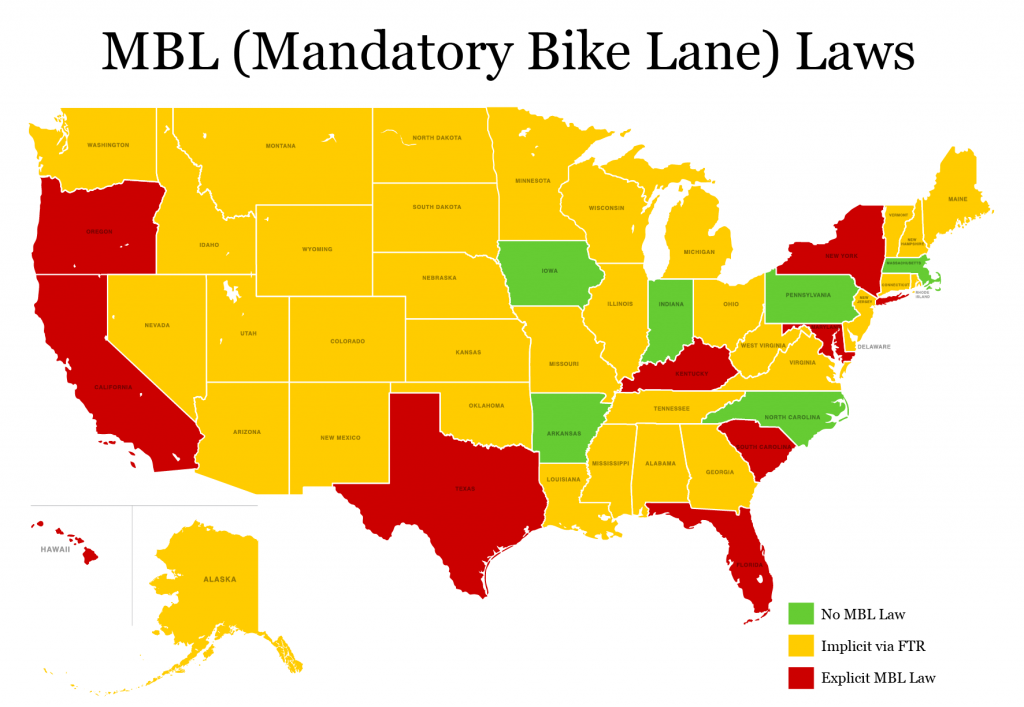 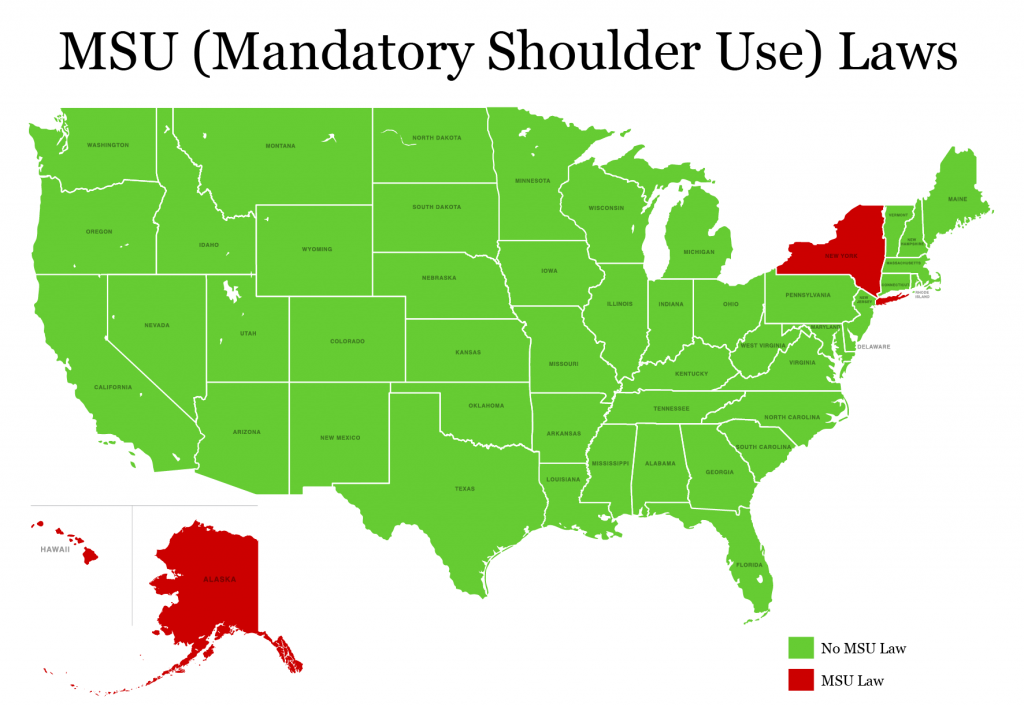 Red states require cyclists to use a shoulder if one is present. In green states, shoulder use is optional. 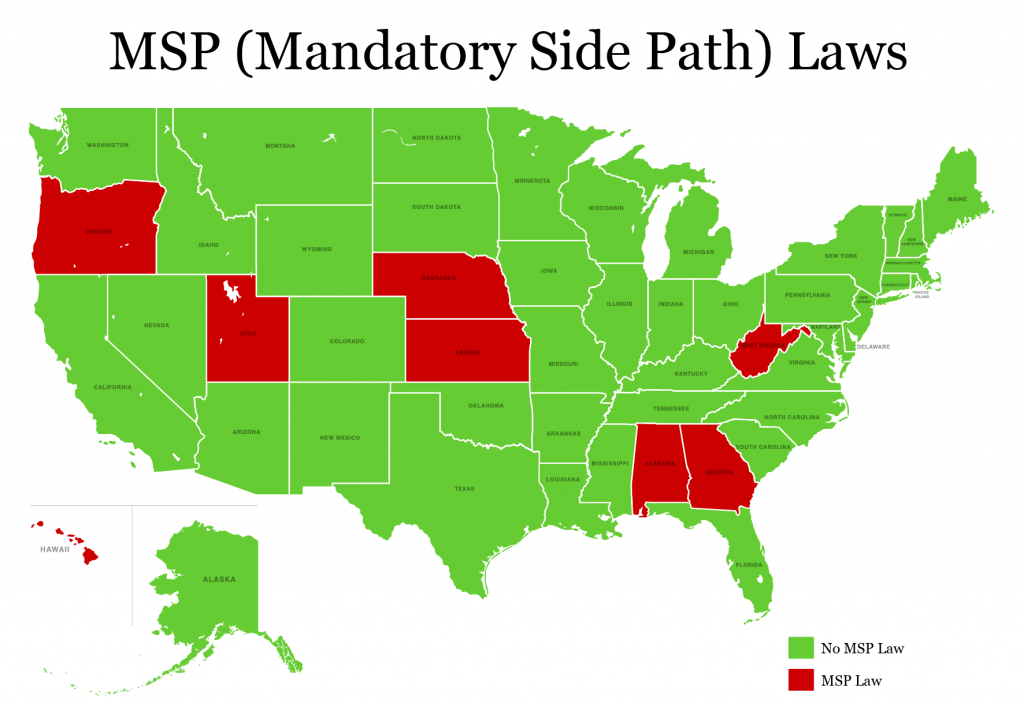 Red states have laws requiring cyclists to use a side path if one is present adjacent to the roadway. In green states, side paths are optional. 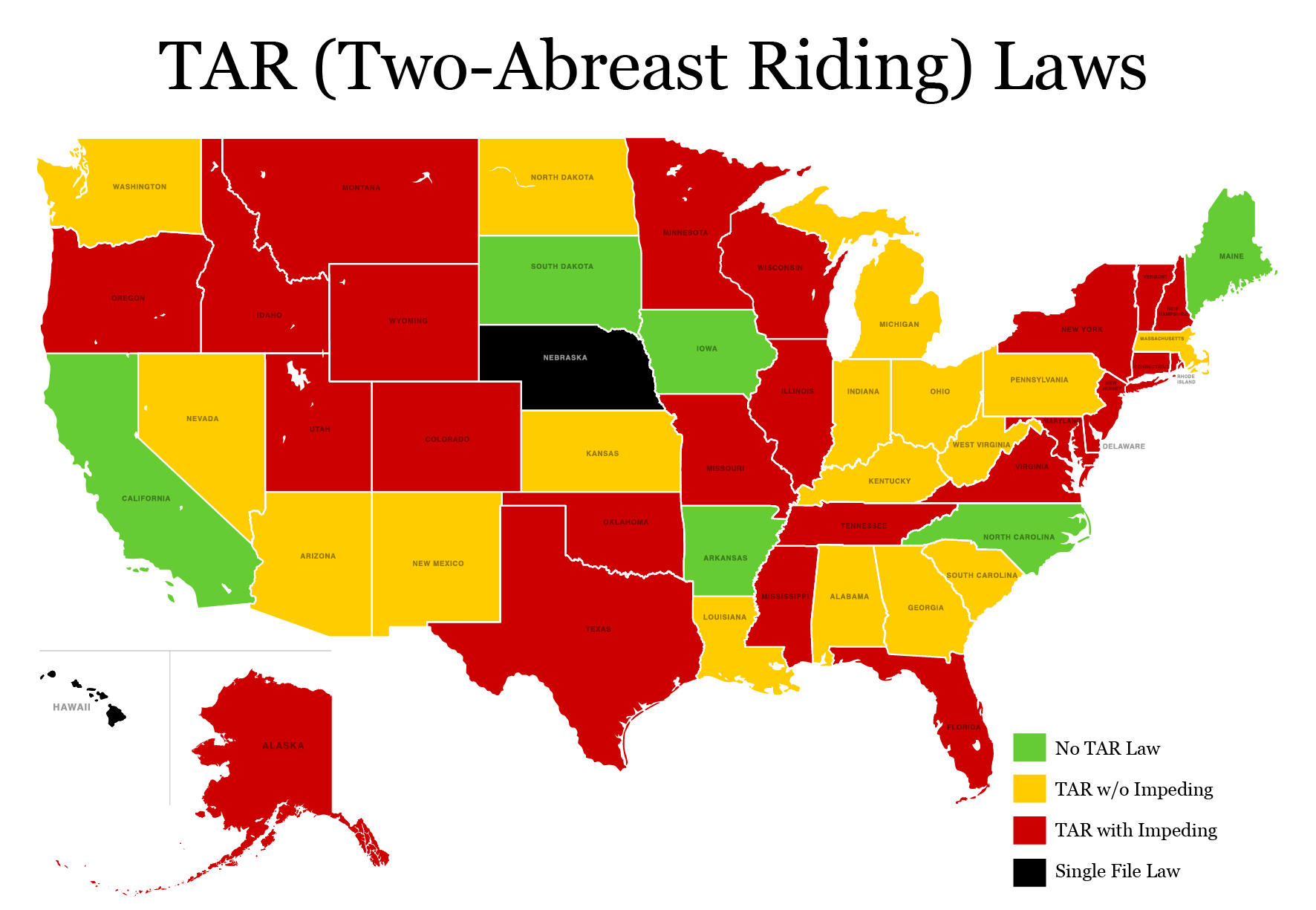 States with laws governing the number of riders who can ride abreast in a lane. Green states do not limit the number of riders riding side-by-side within a single lane. Yellow states limit riders to two-abreast with no stipulation for impeding traffic. Red states require riders to ride single file if riding two-abreast would impede traffic. Nebraska requires single-file riding at all times. 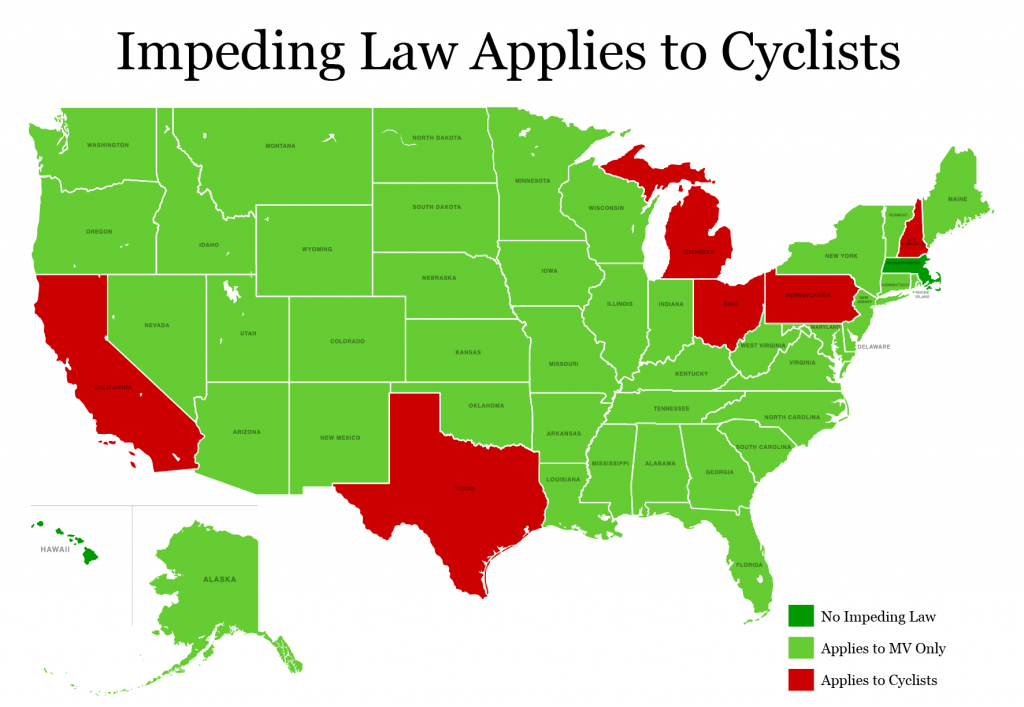 In 42 US states the law against “impeding traffic” only applies to motor vehicle drivers who impede (not merely delay) other drivers by driving too slowly, typically on freeways. Sadly, 6 US states do NOT exclude bicyclists from the provisions of this law and police sometimes use it as a way to harass cyclists who operate as drivers.